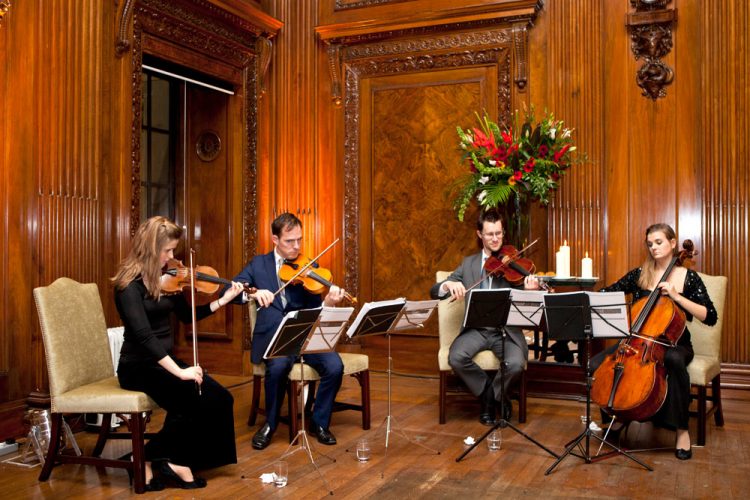 We were delighted when we saw that Bridgerton was one of the first series to use a String Quartet as part of the soundtrack. One of the most common compliments we receive is how much guests enjoy hearing modern pop played on string quartet. So it was great to see that as well as being an extremely popular series (watched by more than 63 million Netflix users in the first month of its release!), the soundtrack was also grabbing attention. The show producers decided to adapt modern pop songs such as ‘Thank U, Next’ for string quartet. This was realised by one of the most popular of the groups to translate pop songs into string quartet. They are the American ‘Vitamin String Quartet’. We first purchased some of their sheet music a few years ago. Their experience shows in the quality of the string quartet arrangements.

This forward-thinking and very modern series was mostly filmed in Wilton House in Salisbury. Of course, the validation of hearing string quartet music in a popular series was great. But also, it reminded us of the many beautiful events we’ve played in amazing historic venues, with our ‘Bridgerton’ wedding string quartets. Whilst pop music played on a classically trained string quartet is somewhat cool in itself, this is highlighted in grand histroric venues. The play between old and new is something that works with catering, floristry and general decor! Some of the venues that our wedding string quartets have played in include Hampton Court, Ashridge House and Blenheim Palace.

We think that part of the magic is that you don’t see string quartets playing pop music normally. We’re also able to easily switch between classical and pop music. It lifts an occasion to another era, where in the past live string musicians (going back to at least Medieval times) would commonly be seen.  Even more elegance and atmosphere is added to an event. And it marries the past and present beautifully.

In the Regency romance, hearing the strings playing songs by artists such as Shawn Mendes and Taylor Swift, really brought the modernity of the series alive. We’re used to seeing period dramas with authentic Baroque music. This of course has its own charm. But the rulebook needs to be discarded at times. This was one of the many ways that Bridgerton stood out from the many other period dramas.

With popular demand, we purchased and learned the 4 available actual string quartet arrangements from the show. We’ve already played them in around 10 or so weddings. A recent Bride requested Wildest Dreams from the show to walk down the aisle to in her wedding. We’re expecting more requests such as these over the coming months. It’s a pleasure to play these and bring an aspect of the show to actual live weddings. Even those who’ve not seem the show have commented on how much they liked these tunes. We’re hoping to make a video of us playing the Bridgerton tunes soon. In the meantime, have a look at our most recent wedding quartet video, shot in Mayfair at another splendid venue!

If you’d like to hire a Bridgerton wedding string quartet for your event, please do get in touch for a friendly chat!

Wedding Music at the Savile Club

When Kathryn and Richard first contacted us about their wedding music in the Savile Club, they seemed to have a...

It's been a fairly quiet 2021 so far, with Covid restrictions gradually lifting but still a lot of caution. We...

Hedsor House is one of the most beautiful wedding venues that we've worked in and ideal for a wedding string...

These days we get more requests for pop music than classical. But having live musicians in your wedding that play...

In a very uncertain and challenging year, it can be reassuring to plan something definite. Almost all of our couples...

We're delighted to become recommended suppliers for the beautiful gem of a venue that is Morden Hall. It's a little...

We've done some great weddings at Pembroke Lodge in Richmond Park over the years. Since becoming an official recommended supplier...

Wedding String Quartet Prices – a Guide to What You Might Pay

String quartet prices for weddings are quite variable. There are some really cheap quartets online. Some display their costs as...