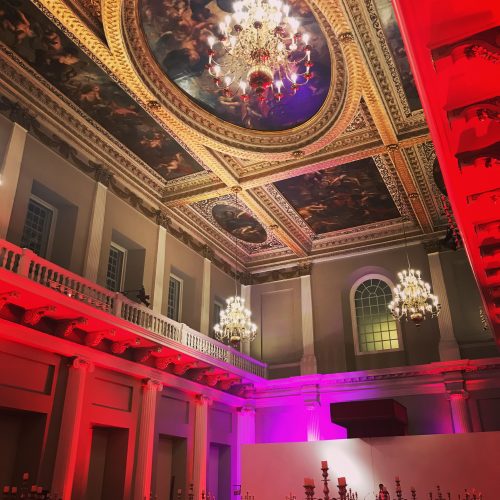 We’ve provided a live string quartet for a corporate awards dinner in the stunning Banqueting House for the last two years in early December. PeriPeri have booked us and we love working with them as they are superb at what they do and their events have that X factor that makes our role even more of a pleasure than usual.

Whilst the venue is stunning, it still needs to be dressed accordingly and this is what the team at PeriPeri do. The guests have always appreciated our versions of modern pop songs for string quartet and the live music that we provide in general. The format of the evening means that we are mic’d up and sound checked to get warmed up and ensure that the sound levels are optimum in the vast Banqueting Hall with its stunning Rubens ceiling. If you’ve not visited, we’d urge you to go and see it if you’re interested in London and royal history (it’s the site of Charles I’s execution). More to the point, it’s a really stunning space that deserves to be seen.

Following the soundcheck, we went and relaxed before performing and our first set was classical only as the guests were coming into the Hall and finding their seats. Although it’s good to sometimes switch things up and not play the most expected music, it’s also effective to set a formal tone at the start of most events and uptempo classical music does exactly that. Playing Zadok the Priest and other appropriate music is fun as we know that the very same pieces may have been performed in this exact room a few hundred years ago, which we think is pretty cool. It’s sophisticated, befits the occasion and adds more grandeur to the already very grand setting.

Following this thirty minute set, we went and took an extended break whilst the guests enjoyed their dinner. Although we usually play throughout with just one break per hour, this was an interesting format that the events company and client chose. The dinner was enjoyed and completed and then the awards were announced and acceptance speeches delivered. As soon as the final award was presented, our string quartet went back to the centre of the room where we were positioned and performed our second and final set which was a mix of jazz and pop music whilst drinks were served to the guests. This part of the evening was much less formal – some attendees were milling around the room, showing off their awards and generally chatting. The music was well-received, we received lots of nice compliments between tunes.  As often happens these days, some people took out their phones and filmed us sporadically as we played David Guetta, Daft Punk, Ed Sheeran and various other recognisable artists/tunes. We often play the same songs at both corporate and private events, as they clearly get great feedback which we can see in real time. We may have played these tunes at hundreds of events, but we still get a great reception from those who appreciate live strings playing songs not normally associated with classical instruments like violins and cellos.

Once we finished this last set of 30 minutes, we went and packed up to leave. Many of the guests had moved to the Undercroft. This is a shadowy, vaulted area which was originally created as a drinking den for James 1 and his friends. It’s an interesting and unusual space. It works perfectly for continuing to celebrate with a cocktail bar set up at the far end for those who want to keep using the vaulted Undercroft for its original purpose! No drinks for us though – it was late enough and we packed up, said our goodbyes and left the majestic Banqueting House hoping to return soon.

Are you having a corporate reception or dinner that could benefit from a live string quartet or any other kind of live music or DJ? If so, contact us to discuss how we can provide the best soundtrack to your event.